Hyperlapse – #1 Video Camera App to Make Videos like a Pro

Hyperlapse is one of three Instagram’s stand alone apps (the other two being Layout and Boomerang). Although all Instagram’s apps are great, this one will blow your mind.

It’s been available for a little over a year now. Its purpose is to help you make time lapses with least effort possible.

Indeed, if you are looking for a simple time lapse app, Hyperlapse is a great option. But a key feature for me is not the time lapse, it’s something else…

Hyperlapse – #1 Video Camera App to Make Videos like a Pro

The idea of a time lapse is that the frames are played back at a much faster rate than that at which they were captured. That’s how they get that beautiful 15-second sunset, stars moving across the sky, or fog roll over hills. By default, Hyperlapse plays them at 6x of the original rate. You can bump that speed up to 12x the rate.

But if you want to enjoy the best feature, don’t speed up the recording. On the opposite, drag the cursor all the way to the left. Speed will now be at the original or 1x the rate.

The result is staggering – the smoothest, the steadiest footage you can record with a phone. No need to invest hundreds or thousands of dollars in high-end equipment.

Just How Is This Possible?

Instagram named the technology Cinema Stabilization. In essence, it uses the data from the gyroscope, which is found in almost every phone out there. The app knows how badly your hands shake, and then tries to keep the frame as still as possible. It does it by recording in 1080p, but the end video is in 720p. The extra frame space is used as a buffer to stabilize the video.

See Cinema Stabilization in action in the video below.

What Can You Shoot with Hyperlapse?

I use it as my primary video recording app. Almost whenever I hold my iPhone in my hands and I hit record, it is within Hyperlapse. The only exception would be, if I used a phone tripod, mount or stand. Or if I wanted to shoot full HD (btw, there’s a hidden menu for changing resolution and other stuff). But then again, I would most likely shoot that kind of video with a professional equipment.

What’s your experience with shooting smartphone videos? Write in the comments.

Do you know anyone who would find the app useful? Send him the link or share it on social media! 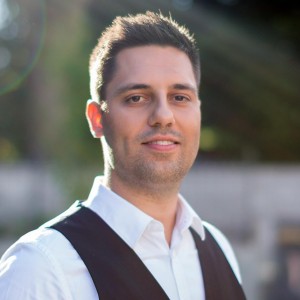 Zoran has made it his personal mission to help every aspiring individual out there start a business he will love building.