Don’t Get Trapped into One of 3 Common UX Myths

User experience design is a tricky subject. Like sports really. You can feel and behave like an expert pretty quickly. You learn a couple of rules and you immediately start participating from the bench, being the right hand of José Mourinho or Phil Jackson.

As a UX designer, I of course welcome all the increased interest in the subject over the years. More knowledge would lift the culture to a higher level and working with clients would be easier. Not to mention the better general experience with using products on our phone or the web it would bring.

I’m glad that you, the reader, are interested in this topic—everybody should have some basic knowledge about UX. I would just like to protect you from common pitfalls and misunderstandings about it.

The misunderstandings usually come in the form of UX Myths. I will try to tackle three that have been raised by clients and fellow designers most frequently over the course of my career and can potentially do the most damage to the project.

So let’s start with the first one…

Myth #1: All Pages Should Be Accessible in 3 Clicks

This one is the holy grail of usability myths for two reasons:

I would start with a quote from the “bible of UX” by Steve Krug. The book is called “Don’t make me think“:

“It doesn’t matter how many times I have to click, as long as each click is a mindless, unambiguous choice.” – Steve Krug

This is the essence of interface usability really. Users usually have a goal and the path to that goal should be mindless and unambiguous.

Let that sink in before moving on…

To understand why the number of clicks does not matter so much, we need to go deeper into the human psychology with the help of something I call “The Human Effort Graph”.

Should all pages be accessible in 3 clicks most? #ux #uxmyth

The reason why Krug’s book is called “Don’t make me think” is because thinking or cognitive effort is in on the far right on our graph of the human effort of interaction with interfaces. When things go wrong in the design of the interface the most frustrating thing for the users is to be confused about what the interface wants from them, how to use it, where are they located etc.

You get the idea…

Test your application or website with a few users (4-6) and let them tell you what is going through their minds while they are using it. Define the major pain points and solve them.

The visual effort is the next villain on our graph. It can be minimized by clear and focused design. If you clutter too much information on users field of view you can cause frustration.

“The simplest way to achieve simplicity is through thoughtful reduction” – John Maeda, The Laws of Simplicity

Find a face of a man in the picture below.

Did you find it? How much did that take? You get my point.

As you see on our graph—Physical effort causes the least amount of pain. Some examples of physical actions are:

With all this new information and knowledge we now have, let’s go back to our original myth:

All pages should be accessible in 3 clicks.

The short answer is:

It does not matter how many clicks are necessary to complete a goal, as long each click is mindless and unambiguous.

For this myth, I have a prepared email template response. Yes, I come across it that many times. I would share it with you, but unfortunately, it’s in Slovenian. We can still tackle it in a more long form.

Origins of the Myth

In the world of 90s web, the majority of people rarely scrolled (or not at all) on their browser windows. The reason was pretty simple.

The tool they used for web browsing looked something like this:

Look at the mouse on the picture above. Something was different. Can you spot it?

This ingenious functionality made scrolling down the page more user-friendly. Before that you needed to use your cursor (with some extra precision) and grab the scroll bar to move below the initial fold of the page. Scrolling felt like a chore.

Trends of clean and clutterless interface design throughout the years pushed the conventions of modern web design in a more structured and linear direction (remember: Visual effort is located more on the right on our Human Effort Graph than Physical effort). That means that designers started to implement scroll functionality not just for ordinary article pages, but even for the main product presentations pages or homepages for example.

It the year 2007 something huge happened that would push this myth even further from the actual user interface usage.

Steve Jobs presented a new device at MacWorld 2007 which changed the whole industry (see the 2:00 mark):

Touchscreen functionality in the original iPhone with the combination of a really small screen really made a difference in how people viewed and used interfaces. And as a consequence designers started to design differently.

Nowadays long form pages that need a lot of scrolling are a common thing. And they work.

Let the Data Do the Talking…

A lot of research was made on this topic. Folks from ClickTale analysed 100,000 page views with heat maps and found interesting results…

If you are not completely sure users would get to the important content that is located below the fold or the data from analytics shows that users are not scrolling – and you want them to, you can make use of some of the cues to help them.

Implementing a scroll arrow just above of a page fold would indicate to a user that important content is located below. For even more effect the arrow could be even animated.

Using a shorter hero image to show the user a glimpse of content beneath could be another way of solving the problem.

An animated image is a cue that is not used that often as the previous ones, but can do the job of notifying a user about the content below successfully nonetheless.

Myth #3: Design Has to Be Original

This is a common trap that a lot of designers get caught in the beginning of their career. The need to be creative, the need to do special, unique work every time.

I can almost feel the pain when writing this because I’m the same. But the importance of design conventions cannot be ignored.

If you break common web design conventions you can also quickly break the user experience. I’m not saying that you shouldn’t break them. All I’m saying is that in order to break the rules successfully you need to know them in and out first.

Design has to be original #ux #uxmyth

Design Conventions Are Your Friends

Users that visit your page for the first time need and must grasp everything in a hurry. To ensure this is the case, the easiest way is to follow existing conventions—so-called standardized design patterns.

Over the years users got used to and have expectations about:

A logo which identifies the site is expected to be in the top-left corner and the navigation to be across the top or down the left side.

For example, what happens if I click on a logo or a shopping cart icon?

You know the answer because of the strong conventions. Use them to your advantage when designing.

The look of familiar icons is a good example. The search icon or social networking sharing options need little introduction for the user. The user is already familiar with them from using the web.

But still—expectations depend heavily on your target group. Doing quick/dirty user tests is the safest and most effective technique.

Take a look at this website of a random university:

Nothing about this page is particular far from the ordinary university page. The text labels in the primary navigation are clear and the user knows what information is hidden behind them. The layout is pretty standard.

If you play it safe, you can reap many benefits in terms of usability. Again, I am not arguing against creativity in web design, I am just trying to convey that sometimes too much creativity can backfire and most importantly: not bring the necessary business goals.

I like the modern (flat) style and the layout, but usability suffers greatly.

Let’s do a quick usability test:

Something like this is awesome. But ask yourself: would this concept and style be appropriate or delight users of a government website that has a lot of older and less tech-savvy visitors?

The main takeaway about doing completely original design would be:

The design does not have to be original for achieving business goals. Use design conventions to your advantage and decide to break them with caution and your user base in mind.

Thanks for reading this! If you have any questions or concerns, please leave them down at the comments and let’s talk! 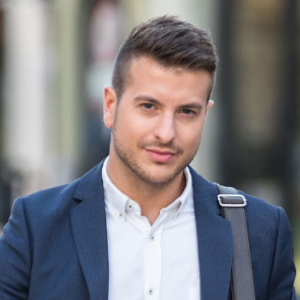 How to Speed up Your Website: The Complete Guide